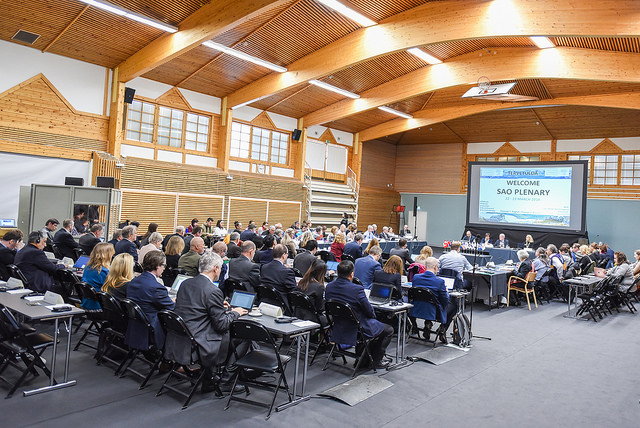 The spring 2018 SAO meeting of the Arctic Council took place on 21-23rd March in Levi, Finland and the Arctic Meteorology Summit was organized in conjunction with it – both were parts of the, so called, "Arctic Super Week" attended by IASC delegates. Two major themes discussed during that week were meteorological cooperation and improvement of telecommunications in the region.

The Arctic Meteorology Summit was organized by the Finnish Meteorology Institute and the World Meteorological Organization (WMO) was a key partner in this work. Both WMO President David Grimes and Executive Secretary Petteri Taalas attended the summit, along with directors of Arctic and European meteorological services and representatives of business and communities. Among things discussed in Levi was the Arctic-Polar regional climate center network that the WMO is working to establish to disseminate more information to stakeholders and local communities. WMO is also spearheading YOPP and on February 1, 2018 it started the Arctic Winter Special Observing Period, which aims at intensifying the work of SAON.

Presentations on the meteorological cooperation were also held on the first day of the Senior Arctic Official (SAO) meeting. The theme – seeing its enormous importance, practical relevance and huge potential for advancement – was widely applauded and supported by Arctic states, Permanent Participants and AC Working Groups. Among other issues debated at the meeting were: progress on the first Arctic Council Strategic Plan, which is currently under development; updates regarding the status of ratification of the Arctic scientific cooperation agreement signed in 2017; and briefing about the recently held table-top exercise of the circumpolar agreement on cooperation on oil spill response (“MOSPA”). Delegates also heard presentations on the theme of connectivity as well as on the 2nd Arctic Science Ministerial Meeting that will be held in Berlin on 25-26th October this year.

Next to the SAO session, there were also side-meetings between the AC Working Groups and the SAO Chair with the Council’s Observers. Participants to those meetings spoke about opportunities for further collaboration and support to work of the Arctic Council. The meeting with the Working Groups was specifically dedicated to areas of black carbon, biodiversity (with a focus on Arctic Migratory Birds Initiative and Ecosystem-Based Approach to Management) and small-community preparedness. IASC was an active participant in all those discussions thanks to its relevant initiatives and activities: air pollution as one focus area of the Atmosphere WG over the next 5 years; projects PACES (Air Pollution in the Arctic: Climate, Environment and Societies) and RATIC-SAIF project that has a part dedicated to infrastructure in remote communities as well as to indigenous infrastructure; and recently established fellowships between IASC and Conservation of Arctic Flora and Fauna WG of the Arctic Council (CAFF) – both to the Arctic Migratory Birds Initiative (AMBI) and to the Circumpolar Biodiversity Monitoring Program (CBMP).

The next SAO meeting will take place on 1-2nd November 2018 in Rovaniemi, Finland.

This meeting report was contributed by IASC Council Member Paula Kankaanpää and CASP Co-Chair Gosia Smieszek. If you are interested in representing IASC at an upcoming Arctic meeting, please contact the IASC Secretariat.