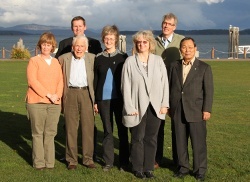 At their meeting in Sidney, Vancouver Island (Canada), the IASC Executive Committee was joined by Fred Roots, the very first IASC President from 1991 until 1993. Today, Roots acts as a Science Advisor Emeritus for Environment Canada. The IASC Executive Committee operates as a board of directors and manages IASC’s activities between IASC Council meetings. It consists of five elected officials: the President and four Vice-Presidents, and the Executive Secretary. The committee meets twice a year to discuss and evaluate science initiatives, look at new opportunities for international cooperation, prepare the agenda for IASC Council meetings and review the budget.