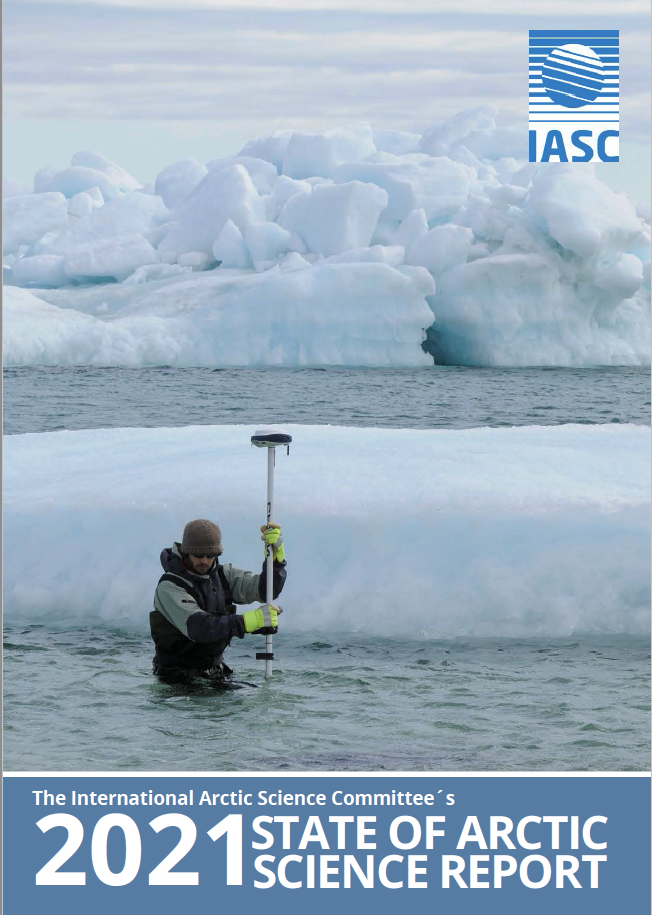 With rising temperatures, geopolitical interests, and an increasingly active landscape of international Arctic (science) organizations, Arctic science is moving faster than ever. IASC is a network that responds to this rapidly changing environment and facilitates the collective voice of the international Arctic research community.

The IASC 2021 State of Arctic Science Report updates the first IASC State of Arctic Science Report from 2020 and presents a cohesive synthesis of international Arctic research activities and priorities, as gathered from the Arctic research community itself. Updates to the report have been provided by the members of the of the IASC scientific Working Groups (Atmosphere, Cryosphere, Marine, Social & Human, Terrestrial), the IASC Council and Executive Committee, the International Science Initiative of the Russian Arctic (ISIRA), the former IASC Action Group on Indigenous Involvement, the Arctic Data Committee and the Sustaining Arctic Observing Network (SAON)

The State of Arctic Science 2021 is expected to provide benefits by identifying priorities, linkages, and gaps in the current work of the international Arctic research community. For example:

IASC, the International Arctic Science Committee, was founded in 1990 with a mission of encouraging and facilitating cooperation in all aspects of Arctic research, in all countries engaged in Arctic research, and in all areas of the Arctic region. IASC is a connector – connecting scientists across international, disciplinary, and cultural boundaries and connecting with those who do research with those who seek the outcomes of that research.

One way in which IASC does this is by providing a collective voice to the international Arctic research community. Decadally, this is addressed through the International Conference on Arctic Research Planning (ICARP) process (e.g., ICARP-III’s “Integrating Arctic Research - A Roadmap for the Future”). However, with rising temperatures, geopolitical interests, the initiation of the Arctic Science Ministerial meetings, and an increasingly active landscape of international Arctic (science) organizations, Arctic science is moving faster than ever. Initial planning has started for the fourth ICARP in 2025, and the IASC State of Arctic Science report series will provide an important resource for its planning process.

IASC is grounded in our community of scientists and aims to provide a consensus voice – by reaching out to their national communities, connecting internationally, and reporting out. This report presents a synthesis of a breadth of input, but it is not exhaustive, as input came only through the IASC Working Groups. Indeed, there are many other NGOs, IGOs, institutions, nonprofits, Indigenous Peoples’ Organizations, companies, countries, and more working in the Arctic knowledge space. Nevertheless, this report comes from scientists themselves.

The State of Arctic Science 2021 remains an initial effort to describe the status of the scientific endeavor at high northern latitudes. Building on a foundation of ICARPIII, IASC has compiled this report out of broad, bottom-up contributions from the IASC scientific community. Arctic change is accelerating, and Arctic science is vast, and so this report attempts to summarize - but just barely scratches the surface of - the tapestry that is Arctic research.

This report adds value and is a useful contribution for researchers, policymakers, and all research stakeholders by setting out the state of Arctic science. While this report is static, Arctic research is vibrant and evolving. Therefore, IASC will update this report on an annual basis in the future.