The State of Glaciers and Ice Caps in the Arctic Region 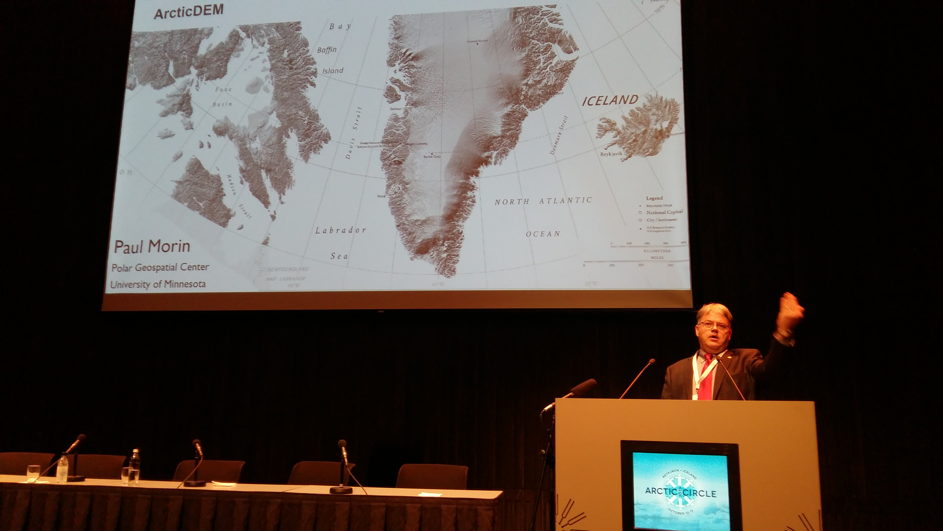 Geodetic glacier mass balance and the ArcticDEM
Workshop in connection with the Arctic Circle Assembly, October 11 2019

Recent mass loss from Arctic glaciers and ice caps and new methods to analyse these changes received attention at an IASC-supported session and workshop, held during this year’s Arctic Circle Assembly in Iceland. This symposium, which draws more than 2000 delegates annually, has now become one of the largest platforms for international dialogue on the future of the Arctic.

In the breakout session on Arctic glaciology, results from Greenland, Arctic Canada, Svalbard and Iceland were presented and discussed. Different methods for determining the mass balance of glaciers and ice caps were outlined by the speakers: Ground based measurements of surface mass balance, estimates of calving rates, aerial photography, airborne lidar measurements, satellite gravimetry and mass balance modelling. The results are unequivocal: Glaciers in the Arctic are losing mass at a dramatic pace in response to rapid warming in the region. The Greenland Ice Sheet is currently the largest single contributor to ongoing sea-level rise, delivering 247±15 GT/yr of meltwater to the oceans. All other glaciers and ice caps in the Arctic (including the Greenland periphery) are estimated to contribute 213±29 GT/yr. Five presentations were given during the 90-minute session in the Harpa Conference Centre in Reykjavík, which was attended by 70 delegates.

The IASC grant also provided partial support for a 1/2 day workshop on the Arctic DEM, a new digital elevation model of the entire Arctic and sub-Arctic region north of 60°N, including glaciated regions. This data set was created from satellite measurements conducted during the US Chairmanship in the Arctic Council in 2015-2017. The workshop was attended by 20 glaciologists and other experts working in this field, representing most Arctic countries. Presentations were given on the Arctic DEM, on initial attempts to use this digital model to study glacier changes since 2015 and on related studies of geodetic mass balance. Participants explored the possibilities and methodologies for deriving geodetic glacier mass balance from repeated DEMs of glaciers from the ArcticDEM and other data sets. Future collaboration of scientists working with Arctic glaciers in this area of research was also discussed by the group.

The Arctic Circle session and the dArcticDEM Workshop form part of activities organized during Iceland´s chairmanship in the Arctic Council 2019-2021.

Highlights from the session and workshop:

These activities were supported by funding from the IASC Cryosphere Working Group. Data on mass loss from glaciers and ice caps, given above, are taken from the IPPC SROCC Report, 2019. More detailed information is given in the dArcticDEM Workshop Proposal Memo, dArcticDEM Workshop Agenda, the Arctic Circle Session Proposal, and attached documents.