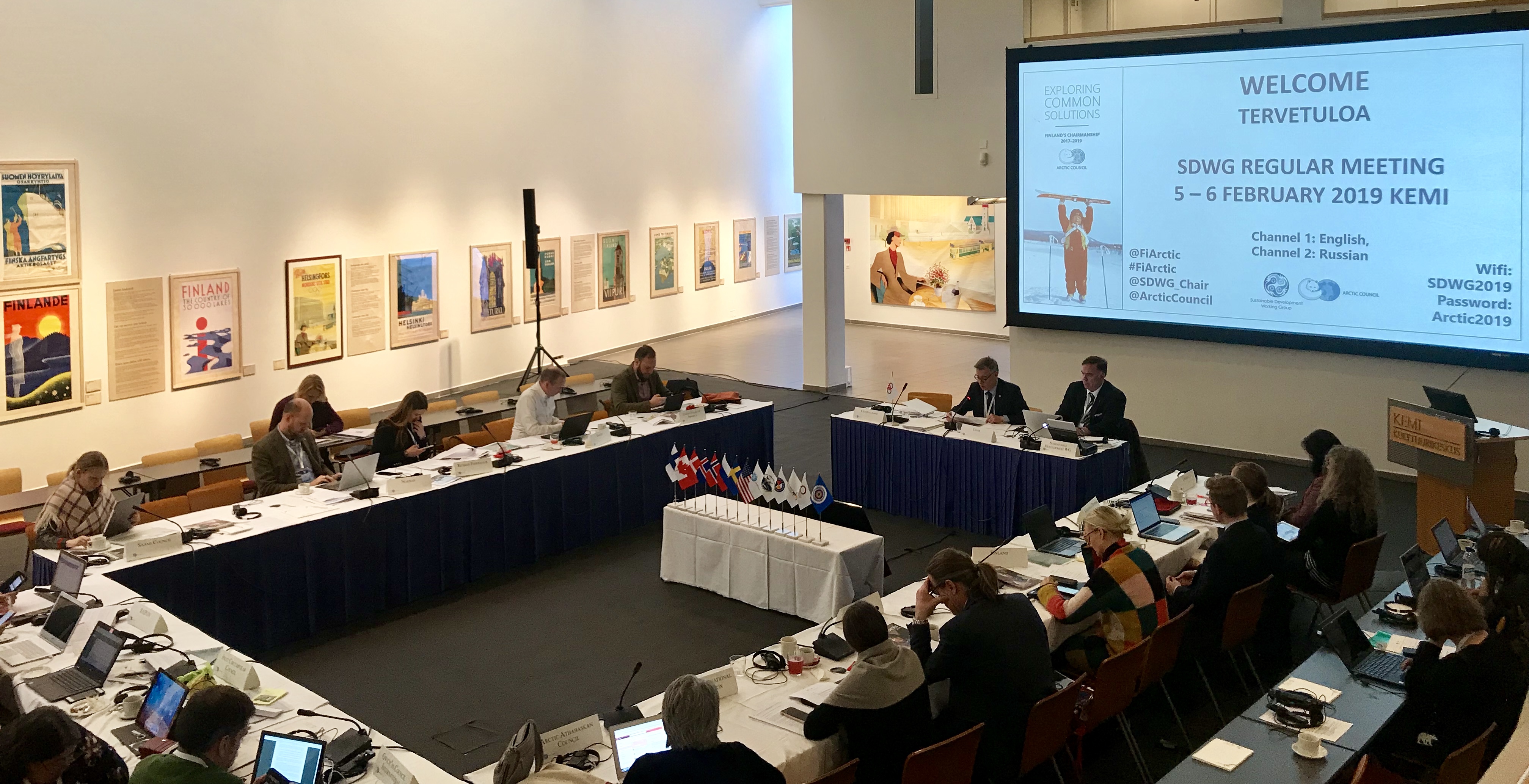 The last meeting of the Sustainable Development Working Group (SDWG) of the Arctic Council under Finland’s Chairmanship of the Council (2017-2019) took place in Kemi, Finland on the 6-7th of February 2019. The meeting was primarily dedicated to reviewing projects and activities completed during 2017-2019 and finalizing the draft work plan of the working group for 2019-2021, both documents that need to be approved by Senior Arctic Officials (SAOs) at their upcoming meetings in March and April 2019.

The presentations in the meeting began with the updates of two expert groups of the SDWG: Arctic Human Health Expert Group (AHHEG) co-chaired by Finnish member of IASC SHWG, Arja Rautio, and Social, Economic, and Cultural Expert Group (SECEG). In her presentation Arja Rautio informed about the progress of the leading projects of the expert group, One Health and Mental wellness and suicide prevention and about continuation of work on the indigenous research ethics. In the coming two years AHHEG will also seek to ensure that the gender issues will be considered and included more systematically in work of the SDWG and the Council more broadly. In relation to that item, IASC representative Gosia Smieszek informed the group about gender activities carried out within IASC SHWG and proposed looking into opportunities for closer collaboration between the SDWG and SHWG on that topic. In addition, Gosia informed the participants about the Arctic Science Summit Week (ASSW) that will take place in Arkhangelsk, Russian on 22-30 May and that the call for abstracts was still open at the time of the meeting (until February 28) and presented a profile of the new IASC SHWG Fellow, Megan Sheremata from Canada.

The SDWG meeting reviewed its carried out activities and proposals for new projects according with the thematic priorities set out in the SDWG Strategic Framework from 2017. Whereas at the time of the meeting several of the projects and proposals needed further discussion among Arctic Council Members and Permanent Participants, they decided those will be finalized in consultations after the closing of the session. The final work results from the period 2017-2019 and a new work plan for the next two years will be presented and approved at the AC Ministerial meeting in May 2019. It is also at that meeting where the Arctic Council is expected to adopt its first long-term strategy, as all the participants were informed by Finland’s Senior Arctic Official, René Söderman in his closing remarks.

With Finland’s Chairmanship of the AC coming to an end it is worthy to appraise the efforts that Finnish Ministry of Foreign Affairs took to ensure reducing the ecological footprint of the meetings that took place over the last two years in Finland. Toward that goal Finland’s MFA in cooperation with the WWF Finland created guidelines for environmentally sustainable meetings, which included among others commitments related to catering (using local and organic foods and avoiding catering disposables) and planning informal events with minimum transportation.

The Ministerial Meeting of the Arctic Council will take place in Rovaniemi, Finland on 6-7th of May 2019, when Finland will pass the gavel to Iceland that will hold the AC’s Chairmanship from 2019 to 2021. In accordance with the operating guidelines of the Arctic Council, the same Arctic state that chairs the entire Council provides the chairmanship of the Sustainable Development Working Group. As such, Iceland will become the chair of the SDWG from May 2019 and the first meeting of the SDWG in Iceland will take place in September 2019, with the following scheduled for March 2020, October 2020, February 2021.