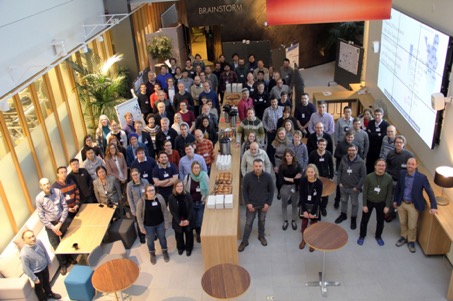 More than one hundred participants discussed recent progress and ways toward improved polar prediction at the Arctic Science Workshop that took place from 14 to 16 January 2019 in Helsinki, Finland.

The meeting was jointly organized by the International Arctic Science Committee (IASC), the Year of Polar Prediction (YOPP) International Coordination Office, and the Finish Meteorological Institute as host.

The first day of the meeting was dedicated to keynote lectures to set the stage on current efforts to bring together observations and modelling during the Year of Polar Prediction.

One of the foci during the following science sessions was the analysis of additional observations that have been obtained during the first two YOPP Special Observing Periods (SOPs) in the Arctic. Extra polar observations during the SOPs captured several extreme weather events that provide useful benchmarks to assess current forecast capabilities and to understand how such events unfold. A Sudden Stratospheric Warming during the Arctic winter SOP (February-March 2018) occurred ahead of the rare event of a polynya opening north of Greenland. While warm anomalies prevailed over the Labrador region as well as the Beaufort and Bering seas in March, northern Russia and large parts of Europe experienced a ‘Beast from the East’, or what the Finns whimsically call a ‘Finnish Wednesday’, with extremely low temperatures and heavy snowfall. Interestingly, the polynya north of Greenland re-opened during the Arctic summer SOP (July-September 2018), resulting from another period of anomalously warm southerly winds.

Results presented from first data denial experiments capitalising on the SOP data indicate that the polar observing systems clearly have impacts on forecast skills not only in polar regions but also in the mid latitudes, and that in particular conventional (i.e., surface, wind profiler, and upper-air) observations are most influential during winter.

A too simplistic, or partly completely missing, surface snow component in state-of-the-art numerical prediction systems has been highlighted as a prevailing cause of surface warm biases, both over land and on sea ice. The use of multi-layer snow schemes is a promising way to improve near-surface temperatures and the energy budget in models in cold atmospheric conditions.

During parallel breakout sessions on predictability, processes, verification, and user engagement, the workshop participants discussed current questions and topics that are particularly relevant to help shaping the YOPP Consolidation Phase (July 2019 to 2022). During this final phase, YOPP data and research will be synthesized to ensure sustained improvements in environmental prediction capabilities for the polar regions and beyond. Recommendations from the breakout groups included:

The abstract book and agenda with links to presentations can be downloaded from the workshop website.