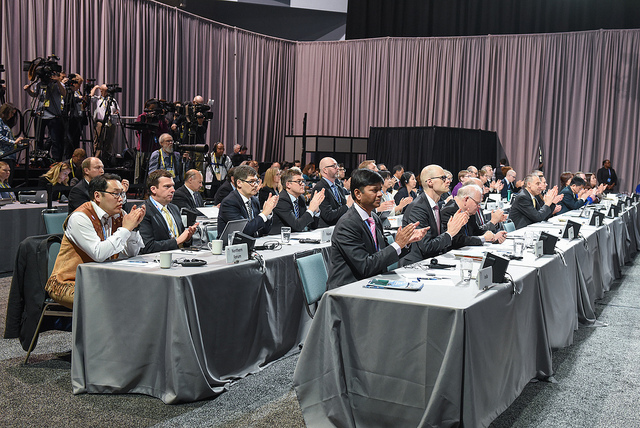 On May 11, the United States as the Chair of the Arctic Council (2015-2017) hosted the 10th Arctic Council Ministerial Meeting in Fairbanks, Alaska. The event marked the end of the US chairmanship of the Council that was passed to Finland, which now holds it until 2019.

As an Observer to the Arctic Council, Malgorzata (Gosia) Smieszek (2014 IASC Fellow and co-chair of IASC’s Communicating Arctic Science to Policymakers Action Group) and Allen Pope (IASC Executive Secretary) represented IASC in Fairbanks for the meeting.

The Arctic Council is composed of representatives of the eight Arctic states and six permanent participants. This Ministerial Meeting was the first in the history of the institution where all eight Arctic states were represented by their ministers of foreign affairs—the highest ranked meeting ever dedicated exclusively to matters of circumpolar cooperation. Whereas the meeting itself was short and went without any disturbances, the negotiations of the ministerial declaration were reportedly quite tumultuous due to the last-minute change of position of the US administration concerning reference in the text to the Paris Agreement. Eventually, the United States agreed to keep it in the declaration that in result reiterates in the preamble “the need for global action to reduce both long-lived greenhouse gases and short-lived climate pollutants.”

In the declaration, Council members, among others (items were selected because of potential interest to IASC and the focus of its working groups):

One of by far the most important results of the Ministerial Meeting in Fairbanks was signing by eight Arctic states of the Agreement on Enhancing International Arctic Scientific Cooperation, the third legally binding agreement negotiated under the auspices of the Arctic Council. The Agreement aims at increasing effectiveness and efficiency of producing scientific knowledge on the Arctic as well as enhancing scientific cooperation in the region. Whereas its provisions are directly applicable only to eight Arctic states (as parties to the Agreement), they include also articles concerning non-Arctic states and scientists coming from them. During the negotiations of the text of Agreement, a lot of attention was paid exactly to this issue, so to the role of non-Arctic partners in scientific cooperation, and much effort was put – among others by IASC that actively participated in the meetings of the Scientific Cooperation Task Force - to ensure their proper inclusion in the agreement.

The depositary of the Agreement is Kingdom of Denmark. The Agreement will enter into force for the period of five years 30 days after the date Denmark receives the last written notification from Arctic states that they have completed their internal procedures required for the Agreement’s entry into force. No later than within 1 year from that moment, eight Arctic states shall convene a meeting to review the implementation of the Agreement.

In addition, on the occasion of the AC Ministerial Meeting, the entire week – “Week of the Arctic” – was dedicated to symposia, discussions, meetings, workshops and exhibitions on the Arctic (detailed program in the link). Among others, there were the International Arctic Assembly and the presentations of all the Working Groups of the Arctic Council providing updates on results of their work during the US AC Chairmanship (2015-2017) (all videos available in the link to the International Arctic Assembly).

This meeting report was contributed by Malgorzata (Gosia) Smieszek and lightly edited by Allen Pope.