Announcement of the 2014 IASC Medal Award 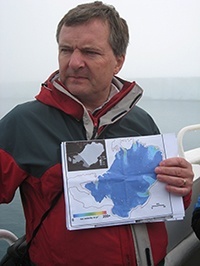 The IASC Medal Committee reviewed the nominations received and unanimously decided to honor Prof. Dowdeswell as a World leader in the field of Arctic glaciology, recognizing his outstanding and unique contributions to the understanding of glacier dynamics and ocean - ice sheet interactions. The committee also highlighted Prof. Dowdeswell´s outreach and communication activities which have been instrumental for public understanding of Arctic change.

The Medal will be awarded by the President of IASC during the Arctic Science Summit Week 2014 in Helsinki (Finland). The award ceremony will be on the ASSW 2014 Common Day on April 8 and include a short introduction by the IASC President and a 30 minutes lecture by the awardee.

Julian Dowdeswell has been Professor of Physical Geography and Director of the Scott Polar Research Institute in the University of Cambridge since 2002. He is also Brian Buckley Fellow in Polar Science at Jesus College, Cambridge. Julian graduated from the University of Cambridge with first class honours and studied for a Masters Degree in the University of Colorado before returning to Cambridge for his doctorate.
Julian has research interests in glaciology and glacial geology, working on the form and flow of glaciers and ice caps and their response to climate change, and the links between former ice sheets and the marine-geological record, using a variety of satellite, airborne and shipborne geophysical instruments. He has worked in many parts of the Arctic (including the Canadian North, Greenland, Iceland, Svalbard, Iceland and the Russian Arctic islands, together with the Norwegian-Greenland Sea, the Barents Sea and Baffin Bay), and also in Antarctica, in a series of field research projects over the past 30 years. He has written over 250 scientific papers and eight books.
Julian was awarded the Polar Medal by Her Majesty the Queen for 'outstanding contributions to glacier geophysics' and has also received the Founder's Gold Medal from the Royal Geographical Society (2008). In 2011 he was awarded the Louis Agassiz Medal by the European Geosciences Union for 'outstanding contributions to the study of polar ice masses and to the understanding of the processes and patterns of sedimentation in glacier-influenced marine environments’.