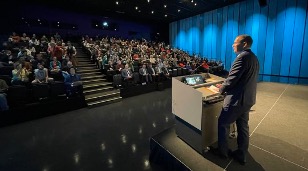 The symposium Cryosphere 2022 in Reykjavík successfully brought together scientists working on all components of Earth´s cryosphere, with a strong focus on changes occurring in the Arctic region. During the Monday plenary sessions, invited presentations were given on North Atlantic climate history, key results from the IPCC AR6 report, mass balance of the Greenland Ice Sheet, Arctic permafrost studies, sea ice monitoring and on hydrological changes occurring in response to global warming. Plenary and special sessions continued throughout the week. Studies of mass loss from glaciers worldwide were presented, with emphasis on the need to increase observation capacity in relation to calving and frontal and basal melting. Examples were given of increased hazards due to permafrost melt in mountains and the formation of proglacial lakes by glacier retreat. A session on Humans in the Cryosphere explored how climate change is currently affecting the resilience of inhabitants in Arctic and high-mountain regions.

More than 300 scientists from 33 countries on 6 continents registered for participation in the symposium. A total of 348 presentations were given (174 talks and 174 posters), nearly 1/3 of them by student researchers. The overall gender balance (in %) was 51F/49M. Several off-venue events were held during the symposium, for participants and the general public. Four excursions were offered during Wednesday afternoon and evening, to areas of glacial and volcanic activity. In addition, two post-symposium excursions took participants to the Langjökull ice cap and to the glaciated and volcanic regions of Southern Iceland.

A grant from the IASC Cryosphere Working Group and other funds allowed the organizers to provide travel grants to 22 early career scientists. The grants covered part of the costs of attending the symposium and were allocated mainly to students traveling long distances to Iceland.