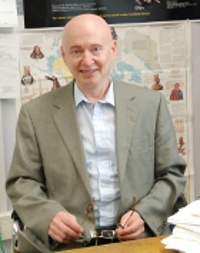 The International Arctic Science Committee (IASC) is proud to announce that the IASC Medal 2012 will be awarded to Dr. Igor Krupnik. Dr. Igor Krupnik is one of our most diverse Arctic scientists. The reasons for awarding him are multifold, each of them worthy to be awarded by themselves. Igor is awarded the IASC medal for making scientist, decision-makers and the general public aware that the Arctic is not only about ice and polar bears but also about its inhabitants, for bridging between natural and social sciences as well as to the knowledge of the indigenous Arctic residents, and for invaluable contributions to the success of the International Polar Year.
The medal will be presented by the IASC President on Thursday 26th April 2012 at the IPY 2012 Conference in Montreal (Canada). The award ceremony will be followed by a 30 minute lecture given by the awardee.

Igor Krupnik, Ph.D., is cultural anthropologist and curator of Arctic ethnological collections at the National Museum of Natural History, Smithsonian Institution, in Washington, DC, USA. An ecologist and cultural anthropologist by training, Igor has been working with Arctic communities in Alaska and Siberia, in documenting indigenous cultural heritage, environmental knowledge, and subsistence adaptations. In 2005–2010, he served on the ICSU-WMO Joint Committee for International Polar Year (IPY) and later as the lead editor of the IPY summary volume, Understanding Earth’s Polar Challenge: International Polar Year 2007–2008 (2011), prepared on behalf of the Joint Committee. For the past 12 years, Igor’s work has focused on indigenous observations of sea ice and climate change across the Arctic that he championed in an IPY project, “SIKU: Sea Ice Knowledge and Use,” he co-led with Claudio Aporta that resulted in the edited volume, SIKU: Knowing Our Ice. Documenting Inuit Sea Ice Knowledge and Use (Krupnik et al., eds. 2010). Igor has published and edited several books and collections, including Arctic Adaptations(1993), Let Our Elders Speak (2000), Northern Ethnographic Landscapes (Krupnik et al., eds. 2005), Smithsonian at the Poles (Krupnik et al., eds. 2009), and a pioneer synopsis on indigenous observations of Arctic environmental change, The Earth Is Faster Now (Krupnik and Jolly, eds. 2002/2010). He has conducted field studies in communities in Alaska, the Bering Sea region, and along the Russian Arctic coast and was the science curator for the Smithsonian exhibit, Arctic: A Friend Acting Strangely (2006).